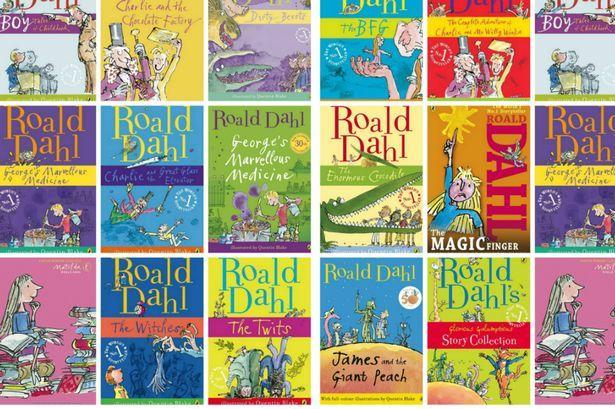 Roald Dahl was a spy, an ace fighter pilot, a chocolate historian and a medical inventor and of course an amazing writer and creator of stories. There are so many to choose, but make sure you read at least 3!

Here are some of our favourites: Matilda, Charlie and the Chocolate Factory and Boy (autobiographical - Roald's early life) 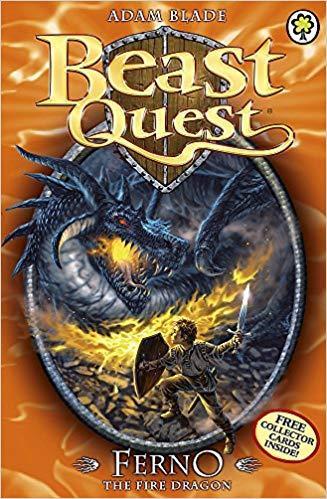 A fast paced and exciting series of books, which are set in a fantasy land with dragons, wizards and strong heroes and heroines. These stories have lots of twists and turns and appeal to reluctant readers.

In book 1, an evil wizard has enchanted the magical beasts of Avantia - only a true hero can free the beasts and stop them from destroying the land. Is Tom the hero Avantia has been waiting for? Join Tom as he braves Ferno the fire dragon... 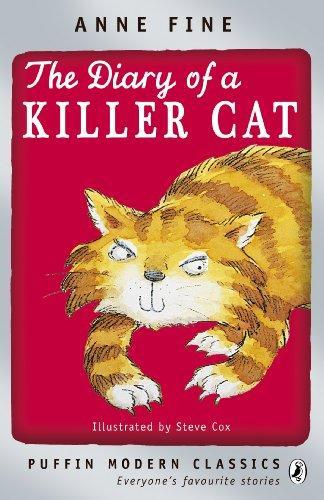 Everyone loves the wickedly dry sense of humour of The Diary of a Killer Cat by Anne Fine.

Poor Ellie is horrified when Tuffy drags a dead bird into the house. Then a mouse. But Tuffy can't understand what all the fuss is about.

Who on earth will be the next victim to arrive through the cat-flap? Can soft-hearted Ellie manage to get her beloved pet to change his wild, wild ways before he ends up in even deeper trouble?

The hilarious antics of Tuffy and his family as told by the killer cat himself. 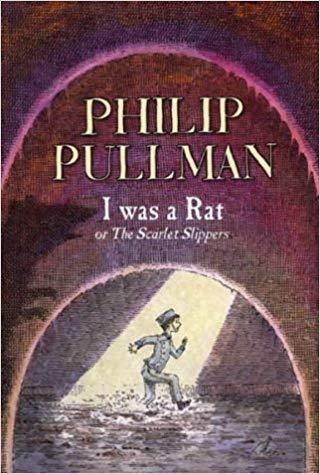 I Was a Rat!  - Philip Pullman

'I WAS A RAT!'  So insists Roger. Maybe it's true. But what is he NOW?
A terrifying monster rampaging in the sewers?
The Daily Scourge is sure of it.
A money-spinning fairground freak?
He is to Mr Tapscrew.
A champion wriggler and a downy card?
That's what Billy hopes.
Or just an ordinary small boy, though a little ratty in his habits? Only three people believe this version of the story. Only one of them knows who Roger really is. And luckily a story about her can sell even more newspapers than one about a rat-boy ... 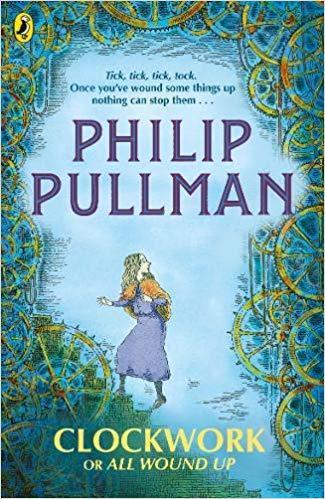 Tick, tick, tick, tock. Once you've wound some things up nothing can stop them . . .

It is a cold winter's night when Karl enters the White Horse Tavern looking like he's swallowed a thundercloud. His final task as a clockmaker apprentice is to make a new figure for the great clock of Glockenheim. He has not made the figure - or got any idea of what it could be, and the unveiling is tomorrow.

Fritz is also in the tavern; there to read aloud his new spooky story. Like Karl, he hasn't finished. Well, he knows how the story starts and he knows it's called Clockwork - so, with the snow swirling down outside, he sets his story going and just has to hope that the ending will come to him as he tells it.

Suddenly, Fritz's story and real life merge in a completely sinister way - and just like clockwork it can't be stopped...

No matter what you think you know... The real magic of Harry Potter lies within. Experience the adventure from the beginning.

Harry Potter and the Philosopher's Stone 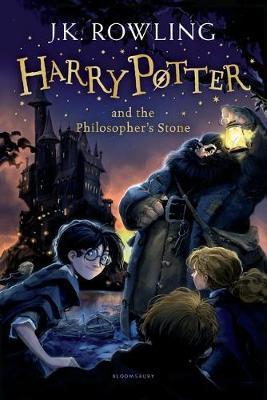 Harry Potter has never even heard of Hogwarts when the letters start dropping on the doormat at number four, Privet Drive. Addressed in green ink on yellowish parchment with a purple seal, they are swiftly confiscated by his grisly aunt and uncle. Then, on Harry's eleventh birthday, a great beetle-eyed giant of a man called Rubeus Hagrid bursts in with some astonishing news: Harry Potter is a wizard.

Even if you've seen the films, the books are so much better!

The Brilliant World of Tom Gates 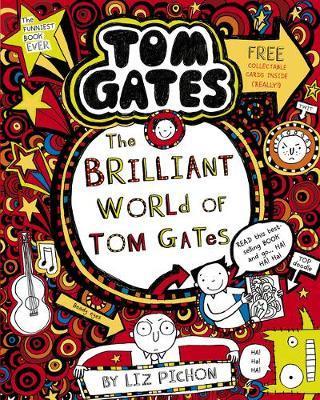 Tom Gates is a master of excuses, expert doodler, comic story writer extraordinaire – and the bane of his grumpy teacher Mr Fullerman’s life. And in his wacky journal of scribbles and silliness, you’ll find all sorts of comic craziness to make you groan with glee! Will Tom ever manage to get his homework in on time, avoid the rage of his teacher – AND impress Amy Porter, who sits next to him? Warning! Do not attempt to read this in public. You will snigger loudly! 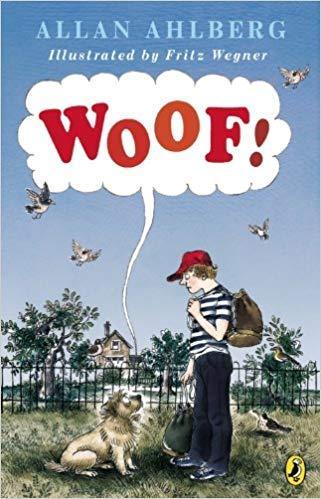 He felt a curious tingling in his hands and feet. He felt his nose becoming cold and wet, his ears becoming flappy. The thought in his mind was: 'I'm turning into a dog!' 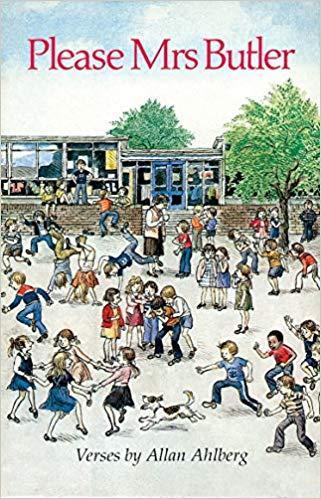 This witty collection of school poems  is full of typical classroom events that will be recognised and enjoyed by everyone. From never-ending projects, reading tests, quarreling, making-up, excuses and 'Please, Sir, it isn't fair.' Fritz Wegner's line drawings beautifully complement the hilarious and poignant verses. Please Mrs Butler was voted the most important twentieth-century children's poetry book in a Books for Keeps poll. 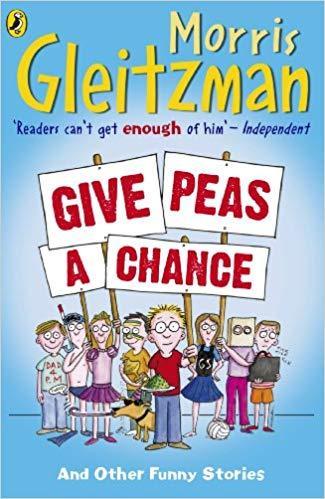 Give Peas a Chance - Morris Gleitzman

A collection of 14 funny short stories

Give fun a chance! Surprise your mum with a chainsaw, be a bigger star than Tom Cruise, save the world with a plate of vegetables, start your new life in a taxi, rescue your family with a tomato, send your dad into a panic with a tractor, do a good deed with a paper bag on your head, pack your suitcase for a trip to the spleen, upset your auntie with ten kilos of chocolate, swap a bomb for three ice creams on a steam train . . . and lots more. 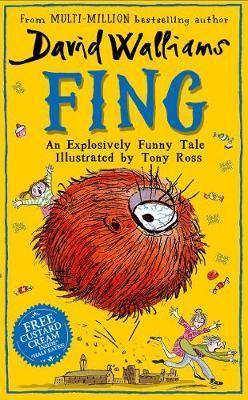 Myrtle Meek has everything she could possibly want. But everything isn’t enough. She wants more, more, more! When Myrtle declares she wants a FING, there’s only one problem… What is a FING?

Mr and Mrs Meek will do anything to keep their darling daughter happy, even visit the spooky library vaults to delve into the dusty pages of the mysterious Monsterpedia. Their desperate quest leads to the depths of the jungliest jungle where the rarest creatures can be found. But will they ever find a FING?

'Dahl finally has a worthy successor.' - The Telegraph

'Another triumph for David Walliams. His books are a breath of wonderful fresh air.' - The Sun 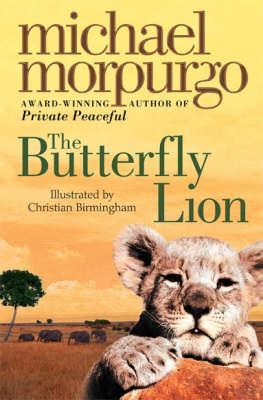 A lyrical and moving tale of a young boy growing up in Africa, and his lifelong friendship with a white lion.

"All my life I'll think of you, I promise I will. I won't ever forget you."

Bertie rescues an orphaned white lion cub from the African veld. They are inseparable until Bertie is sent to boarding school far away in England and the lion is sold to a circus. Bertie swears that one day they will see one another again, but it is the butterfly lion which ensures that their friendship will never be forgotten. 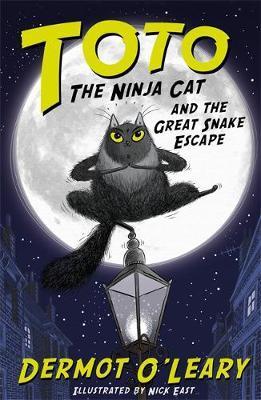 Toto the cat and her brother Silver live footloose and fancy-free in a townhouse in London. Toto is almost totally blind, and learned to trust her senses from a ninja cat-master who taught her back in Italy where they were born.

By day, Toto and Silver seem to be ordinary cats, but by night, they love to have adventures! One evening, news reaches Toto that a king cobra has escaped from London Zoo! Together with help from a very posh cat and two hungry tigers, Toto and Silver must investigate. Can they find the giant snake, before it's too late?

For fans of The Aristocats, The Secret Life of Pets, 101 Dalmatians and Atticus Claw Breaks the Law. Purrfect for reading aloud or for children to curl up with and read alone, the story features brilliant black and white illustrations throughout. With gentle themes of friendship, inclusivity and winning in the face of adversity, this is a hilarious must-read for all animal-loving kids!

'The idea for Toto first came to me when my wife and I rescued two stray cats from an olive grove in Italy. One of them, Toto, has been blind from birth, but we quickly realised she had ninja-like reactions. Like a lot of cat owners (or cat servants), we like to imagine our pets having secret lives when we're out or asleep. So before I knew it I was writing about Toto and her brother Silver's nocturnal adventures around London. 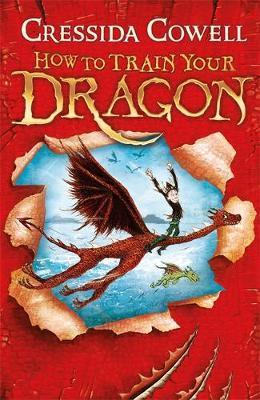 How to Train Your Dragon - Cressida Cowell

Read the hilarious books that inspired the How to Train Your Dragon films!

Hiccup Horrendous Haddock the Third is a smallish Viking with a longish name. Hiccup's father is chief of the Hairy Hooligan tribe which means Hiccup is the Hope and the Heir to the Hairy Hooligan throne - but most of the time Hiccup feels like a very ordinary boy, finding it hard to be a Hero.

In the first How to Train Your Dragon book Hiccup must lead ten novices in their initiation into the Hairy Hooligan Tribe. They have to train their dragons or be banished from the tribe forever!

But what if Hiccup's dragon resembles an ickle brown bunny with wings? And has no teeth? The Seadragonus Giganticus Maximus is stirring and wants to devour every Viking on the Isle of Berk . .

READ ALL 12 BOOKS IN THE SERIES! You don't have to read the books in order.

SEE INSIDE Your Body - Usborne books 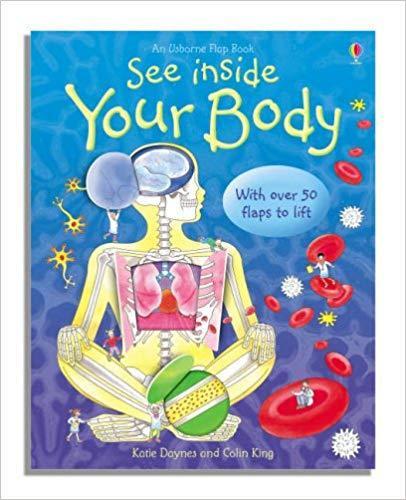 This non fiction book allows you to discover the inner workings of the human body in a gently humorous, yet accurate way. Bright, original colour illustrations and diagrams display all the major organs of the human body and are accompanied by witty, clear and informative factual text. It contains over fifty flaps, which you can lift to reveal extra detail. Entertaining and authoritative, this is human biology  at its very best - a book both educational and enjoyable.

Here are some other titles in the series also worth a look... 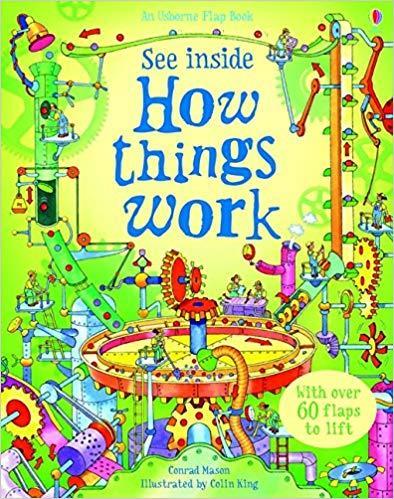 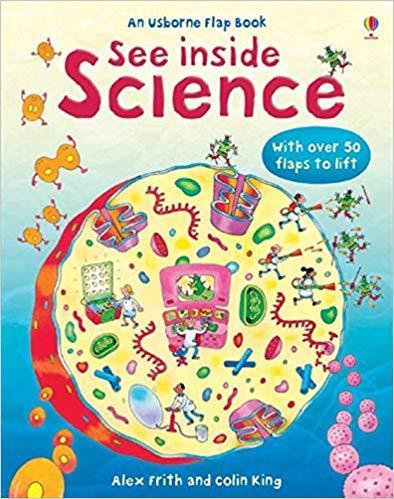 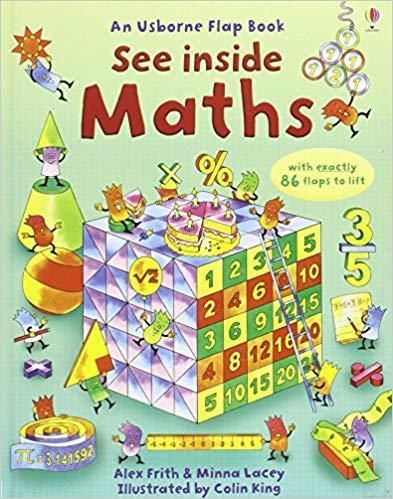 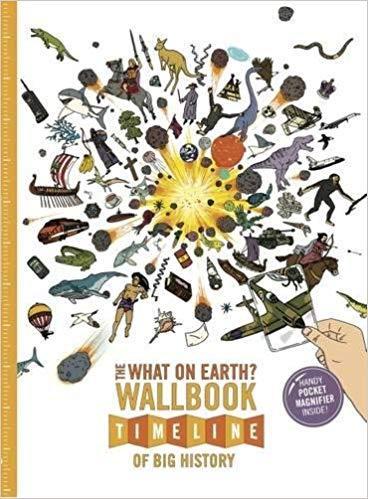 The What on Earth? Wallbook Timeline of Big History  by Christopher Lloyd

IMAGINE TAKING a trip through the history of everything from the beginning of the universe to the present day! This unique 'big history' wallbook includes a 2 metre-long fold-out timeline containing more than 1,000 pictures and captions that tell the story of the history of the world. The timeline is divided into 12 sections covering both natural history as well as the history of human civilisations in each of the world's continents. Readers can easily compare what was happening across the world at any given moment in time. The Wallbook also includes the Wallbook Chronicle which reports on more than 30 key moments from the timeline in the style of a newspaper. Also includes a crossword, letters to the editor, 50-question quiz and pocket magnifier. 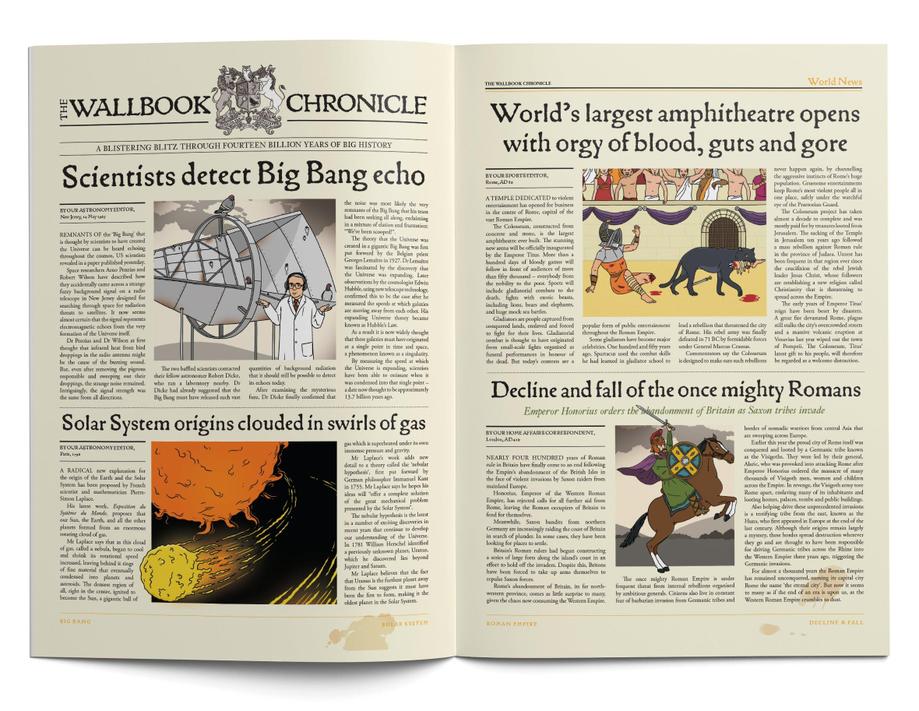 Meet 52 icons of color from the past and present in this celebration of inspirational achievement—a collection of stories about changemakers to encourage, inspire and empower the next generation of changemakers
Author Jamia Wilson discusses her inspiration and motivation for writing the children's book Young, Gifted and Black.

If you've read some of the authors below then click on their names to get some more suggestions of what to read next. If you haven't read them, then it's a great place to start!