Maise continues to excel in her Netball Career  Not only did her school Netball team (Cheadle Hulme) win the England Netball U16 National Schools championship but she also made her debut in the England Netball National Prem 1 (which is the highest level of club netball after the Superleague). It is wonderful to hear of our past pupils doing so well, very well done to Maisie!

Outstanding Past Pupil Success - Oxford and Cambridge Boat Race
Last year we reported that past pupil Bronya Sykes, was selected for the Cambridgewomen’s crew in the Oxford Cambridge Boat Race but unfortunately the race couldnot go ahead due to the first Covid lockdown.
This year she has once again been selected and will be taking part in this historic raceon Sunday 4th April at 3:50pm. Bronya is currently in her 2nd Year at Gonville & Caius College, studying Natural Science. She is on the biological pathway of the naturalsciences degree and, having had a broad introduction to ecology and evolution, she isalso taking history and philosophy of science.
Bronya learnt to row at Trafford Rowing Club and started when she was in Y6; shetalked about taking part in this traditional sporting event even then! Many staff atschool remember her excellent work ethic and involvement in school life. Her hard workand determination has paid off

Past Pupil Bronya Sykes was selected to row for Cambridge in The 2020 Boat Race. Unfortunately, due to the Coronavirus lockdown the event was cancelled. Well done Bronya, we're still incredibly proud!

Past pupil Emma Simpson has been selected by UK Athletics for the Performance Pathways Programme for Triple Jump.

‘The British Athletics Performance Pathway aims to provide opportunities to prepare, confirm and support the most promising young athletes on a journey to becoming future Olympic and Paralympic medalists in 2020 and beyond.’

And Past Pupil Victoria Barlow has been selected for the Olympic Squad in Pole Vaulting. 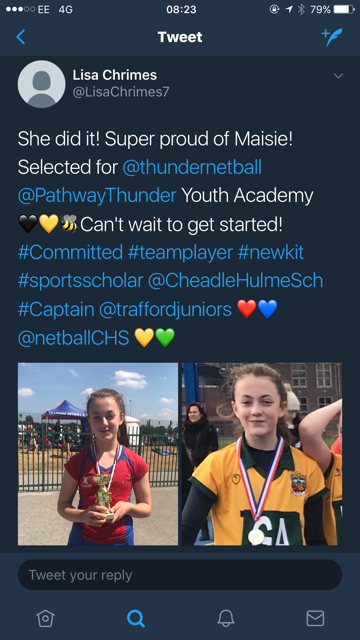